You are here: Home › Medical history

Caroline has long had an interest in the life and work of Samuel Pozzi, known as ‘the father of French gynaecology.’ Visit the website dedicated to her research, recognition and publications both in french and english.

Pozzi, born in Bergerac in southwest France in 1846, studied medicine in Paris and spent his working life living in that city. He was the first professor of gynaecology at the University of Paris (1901); wrote an important textbook of gynaecology, Traité de gynécologie (Paris, 1890) soon translated into many languages and in use until the 1930s; and was the author of more than 400 scientific articles during his career. He also had major social, political and cultural interests.

Caroline is the author, with Francesca Miller, of The Diva and Doctor God (2010), a biography of Pozzi that also includes a great deal of new information about the internationally-acclaimed French actress Sarah Bernhardt, with whom Pozzi had an affair and then a life-long friendship.

The book is based around letters from Bernhardt to Pozzi, which Caroline was able to access in Paris after she met Nicolas Bourdet, great grandson of Pozzi, who has maintained the family archives containing a huge amount of Pozzi’s correspondence and other material, and who has has been extremely generous with his time and with assistance towards the research. Caroline and Francesca also received much help and advice from Professor Lawrence Joseph, formerly of Smith College, who is an expert on the life and work of Catherine Pozzi, Samuel’s daughter and a well-known French poet.

The Diva and Doctor God has been translated and published in French by Editions Glyphe, Paris, as Sarah Bernhardt et le Docteur Pozzi, 2013 (translator Francine Siety). 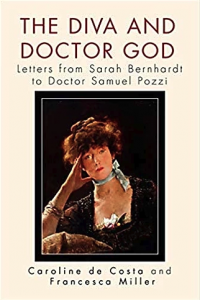 The Diva and Dr God by Caroline de Costa